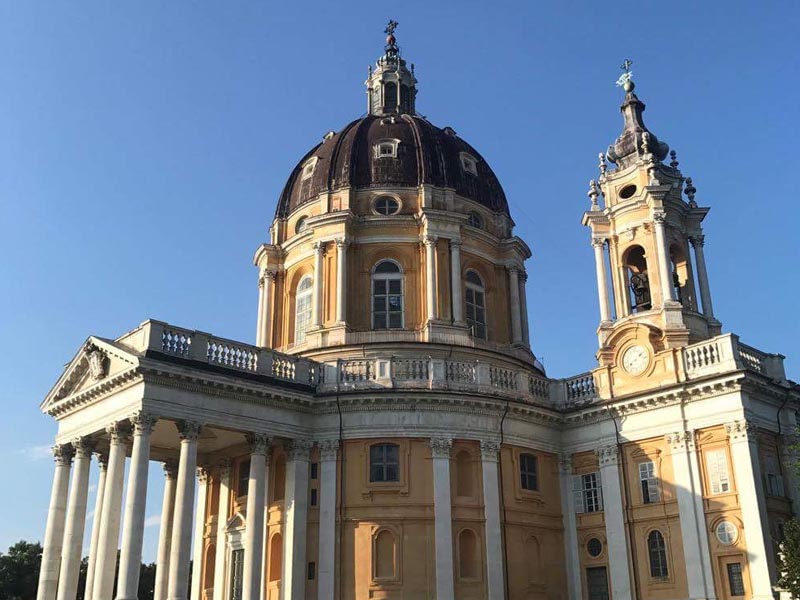 Designed and executed by Filippo Juvarra in 1717-1731, this basilica is dedicated to the Nativity of Mary and holds the tombs of the House of Savoy. According to tradition, it was commissioned by Vittorio Amadeo II in fulfilment of vow taken if there victory against the French, achieved in 1706. Its position – connected visually with the royal palace at Rivoli – was chosen to emphasise the regal dignity of the House of Savoy attained after the Treaty of Utrecht (1713). The circular form of the church is topped by a 75-metre high dome and flanked by two bell-towers 60 metres tall. An impressive portico of eight Corinthian columns stands in front of the facade. Inside, the stucco decoration and the marble of the altar and floor create dramatic plays on light. The high altar, whose frame was designed by Filippo Juvarra, is enriched by a marble bas-relief by Bernardino Cametti, which portrays the glorious battle for the liberation of Torino. Paintings and sculpture by Beaumont, Sebastiano Ricci, Carlo Antonio Tantardini, Bernardino Cametti and Agostino Cornacchini decorate the side chapels.