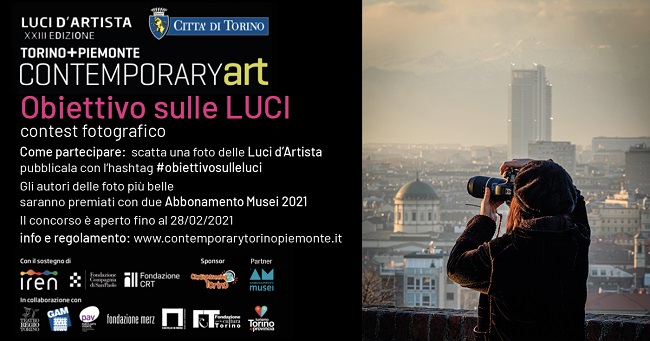 Immortalize an Artist’s Light with a click and participate in the “Lens on Lights” competition, to enhance and spread the public art heritage of Torino! To participate in the initiative - valid until February 28, 2021, the last day of the open-air exhibition of works - simply immortalize the artistic lights and post the shot on your Instagram profile using the hashtag #obiettivosulleluci.

It will be a panel made up of representatives of the museums to choose the photo that, among all the others, is able to best express the “magic” transmitted by the works set up in the streets and squares of the city; the runner-up, on the other hand, will be assigned by the social media audience: the photo that has received the most “likes” will be awarded the prize. The authors of the selected shots will each receive 2 Piemonte Valle d’Aosta 2021 Museum Subscriptions as a prize.

But what and where are the lights?
In the centre there are: “Cosmometrie” by Mario Airò in Piazza Carignano, “Flying Carpet” by Daniel Buren in Piazza Palazzo di Città, “Kingdom of flowers: cosmic nest of all souls” by Nicola De Maria in Piazza Carlina, “Vertical Baroque Garden” by Richi Ferrero in Via Alfieri 6 (Valperga Galleani Palace), “The energy that unites expands into the blue” by Marco Gastini in Umberto I Gallery, “Planetarium” by Carmelo Giammello in Via Roma, “Migrations (Climate Change)” by Piero Gilardi in San Federico Gallery, “Culture = Capital” by Alfredo Jaar in Piazza Carlo Alberto, “Double passage (Torino)” by Joseph Kosuth on the Vittorio Emanuele I Bridge, “Luì and the art of going into the woods” by Luigi Mainolfi in Via Carlo Alberto, “The flight of numbers” by Mario Merz on the Mole Antonelliana, “Solar wind” by Luigi Nervo in Piazzetta Mollino, “Palomar” by Giulio Paolini in Via Po, “Us” by Luigi Stoisa in Via Garibaldi.

And then there are “Ice Cream Light” by Vanessa Safavi in Piazza Livio Bianco, “Fly on...” by Francesco Casorati in Via Di Nanni, “My noon” by Tobias Rehberger in Via Germonio 12, “Illuminated Benches” by Jeppe Hein in Piazza Risorgimento, “Love does not make noise” by Luca Pannoli in Piazza Eugenio Montale, “Christmas sails” by Vasco Are in Piazza Foroni, “Loving the differences” by Michelangelo Pistoletto in Piazza della Repubblica, “Little blue spirits” by Rebecca Horn at the Monte dei Cappuccini, “Once again” by Valerio Berruti in Via Monferrato, “Fountain Wheel Light” by Gilberto Zorio at Laghetto Italia ’61, “The tree of PAV” by Piero Gilardi in Via Giordano Bruno 31.
Ready to shoot?
Share on
Contact info
Sedi Varie, 10100, Torino (TO)
Visit the website

This event is part of
LUCI D'ARTISTA XXIII EDIZIONE 2020 - 2021
It is located in
CITTÀ DI TORINO - SEDI VARIE
Keep in touch with us...
Subscribe to our newsletter!
Fuoritorino
Residenze Reali Sabaude del Piemonte
OUR CARDS
Convention Bureau