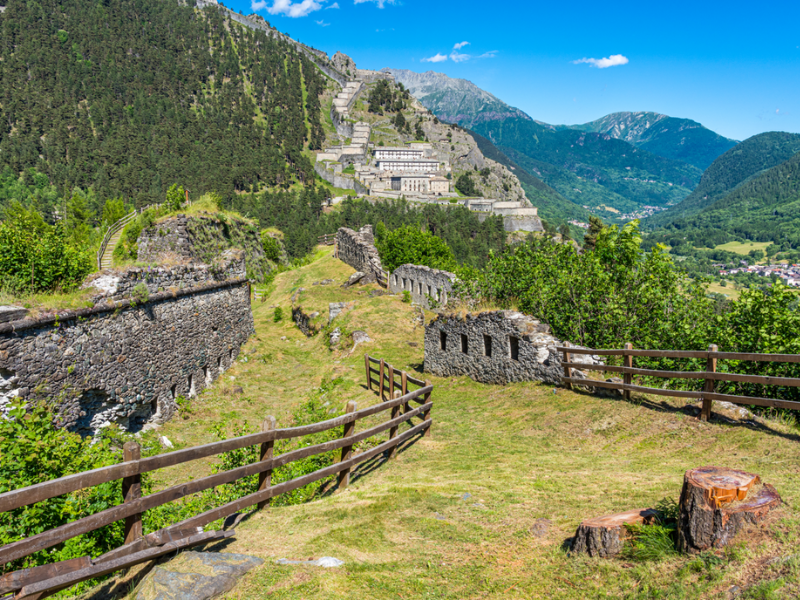 The fort of Fenestrelle is Europe’s biggest fortified structure and the largest walled construction after the Great Wall of China. A stone colossus that extends for about five kilometres along the hills of the Val Chisone and covers a height difference of almost 700 metres.

The only Piedmont fort of the 18th century still with its original architecture, it is located within the Orsiera-Rocciavré Regional Nature Park, and since 1999 it has been the symbol of the Province of Turin.

More than a fort, it can be viewed as a barricade. Made up of several small forts, (San Carlo, Tre Denti, Sant’Elmo and Valli), powder magazines, medieval quarters that acted as a fortress, quarters for the troops, all connected by redoubts and powerful embrasures united by that admirable work that makes Fort Fenestrelle even more unique and fascinating: the covered stairway (about 4000 steps), excavated in an artificial tunnel of almost two kilometres.

It is on the parade ground of Fort San Carlo that all the most representative buildings of the defence complex overlook: the governor’s palace, the pavilion of the officers and the church. From the parade ground there also starts the long covered stairway connecting every part of the large fortress. Inside Fort San Carlo there are also three military quarters, the Santi’Ignazio powder magazine, the overhangs, the royal gateway and many other buildings used as depositories, laboratories, infirmaries and guardhouses.