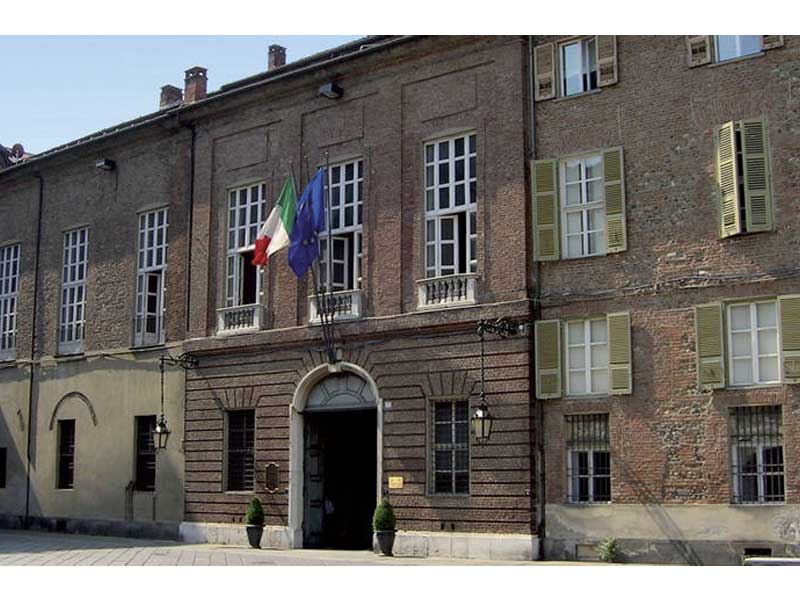 CHIABLESE PALACE headquarters of the Superintendence of Archeology, Fine Arts and Landscape for the Metropolitan City of Torino.

ROUTE DESCRIPTION - The Apartment of the Duke of Chiablese At the end of a complex restoration of the main floor of Chiablese Palace, carried out by the Conservation and Restoration Centre of Venaria CCR during the years 2019 and 2020, the Superintendence is opening a new tour route to the public starting from 2021, a route that leads to the discovery of the Apartment of the Duke of Chiablese Benedetto Maurizio of Savoy, second son of the King of Sardegna Carlo Emanuele III. In the long Alfieri gallery, transformed in the mid-nineteenth century into a bedroom with an adjoining alcove, damaged by the bombings of 1943, an interdisciplinary team of the CCR has restored the richness of the relief decorations in gilded stucco that extend along the springer bar of the vault with cherubs, festoons, racemes and foliage. The removal of the repainting of the wooden lining of the lower part of the walls makes it possible to admire, again today, the floral decoration attributed to Michele Antonio Rapous, who also did the fireplace screen. Today the restored Alcove room again hosts the extraordinary double-body desk with ivory and mother-of-pearl inlay works made by the cabinetmaker of the Savoy court, Pietro Piffetti after the discovery made in 2018 by the Carabinieri of the Command for the Protection of Cultural Heritage. With the support of the “Compagnia di San Paolo” Foundation, work continued in two other rooms on the main floor used in the late eighteenth century as a meeting room and a bedroom for the Duke of Chiablese. In the bedroom the restoration work led to the recovery of the eighteenth-century floral decoration of some panels of the plinth (“lambris”) which, together with the flower and fruit paintings on canvas used as overdoors and the fireplace screen, constitute a fascinating organic decorative ensemble.

DESCRIPTION of CHIABLESE PALACE With its austere proportions, Chiablese Palace closes the square in front of the Royal Palace to the west, extending up to the Guarinian Church of St Lorenzo. Entrusted to the Piemonte Superintendence of Monuments in 1954, since 1960, the year in which the first restoration was completed after the heavy war damage of 1943, today it houses the headquarters of the Superintendence of Archeology, Fine Arts and Landscape for the Metropolitan City of Torino. It was erected, presumably by reshaping pre-existing medieval buildings, at the end of the 16th century, when Duke Emanuele Filiberto decided to renovate the central square of his new capital and commissioned the design to Ascanio Vittozzi. In 1753 Carlo Emanuele III assigned the palace to his son Benedetto Maurizio, Duke of Chiablese, born to his third wife, Elisabetta of Lorena, and entrusted the court architect, Benedetto Alfieri, with the task of renovating and extending its apartments; the Alfieri intervention, which involved the partial demolition and the raising of the pre-existing building, gave Chiablese Palace its current appearance: through a monumental front door open on the sober facade, made of brick, you enter a porticoed atrium with stone columns and pillars and cross vaults, and then you go into the two internal courtyards, divided by a central wing. A majestic marble staircase leads to the main floor, rich in furnishings, stuccowork made by Sanbartolomeo, inlaid wooden floors, painted boiseries, marble fireplaces, mirrors, overdoors attributed to Michele Rapous, to De Mura, to the Roman Gregorio Guglielmi, eloquent evidence still today of the pomp of court life. In 1814 the Palace returned to the Duchess of Chiablese, widow of Benedetto Maurizio, then, from 1824, it became the property of King Carlo Felice, who preferred it to the contiguous Royal Palace, living there until his death. In 1851 the daughter of Ferdinand and Maria Elisabetta di Sassonia, Margherita, was born there, Margherita was the first queen of Italia.

CONTACTS for booking a visit:  superintendence of Archeology, Fine Arts and Landscape for the Metropolitan City of Torino Ph. (+39) 011.5220403; www.sabap-to.beniculturali.it

VISITING DAYS AND HOURS: by reservation from Monday to Friday 9am-12.30pm 2.30pm-5pm (last admission). The visit takes place EXCLUSIVELY by RESERVATION to be requested via email at sabap-to@beniculturali.it or the PEC (certified email) mbac-sabap-to@mailcert.beniculturali.it, and indicating a telephone number is MANDATORY COSTS Free admission, reservations