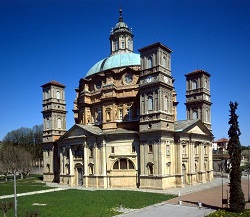 The largest elliptical dome in the world
The Duke Charles Emmanuel I, much taken by the people worshipping at the shrine of the Virgin Mary, tasked Ascanio Vitozzi with transforming this place of religion into the new pantheon of the House of Savoy.
The construction works using sandstone from Vico came to a halt but were then resumed at the beginning of the 18th century by the architect Francesco Gallo who instead chose "terracotta": a careful observer will note the difference in architectural styles in the majestic building, whose bell-towers were only completed in the early 20th century.
The shrine is holder of two records: the largest elliptical dome and cycle of frescos in the world.
Share on
Contacts
Piazza Carlo Emanuele I, 1, 12080 Vicoforte (CN)
+39 0174565555
santuarvico@libero.it
Visit the website