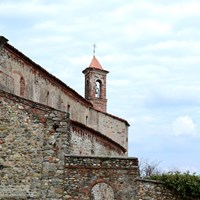 The church, on top of a hill in a strategic position, was built in the eleventh century as a Benedictine priory in defense of the route linking northern and southern Europe.
The building, made of bricks and stones, has the salient façade denoting the presence of three naves; along the sides, under the cover, it runs a decoration hanging arch brick while the back reveals an apse in the part of the nave terminal.
On the right side there are the remains of buildings to house pilgrims and monks of the priory. Walls with arches supported by pillars divide the interior into three aisles; at the end of the middle it leads to the presbytery by means of a stone staircase.
The crypt, located beneath the presbytery, is supported by slender columns and stone capitals of which are for reuse and date back to the early medieval period (VI-VII century).

SAFETY RULES:
Entrances will be limited and allowed with the necessary PPEs.