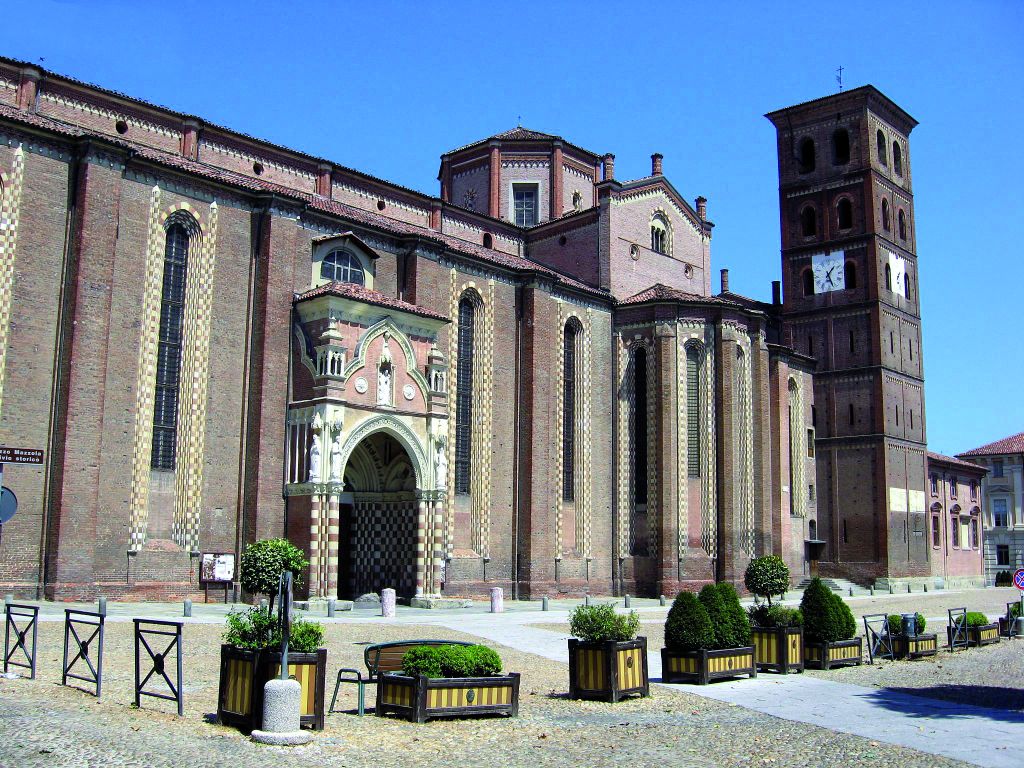 Km 14,1 / Elevantion Change - 101
The city of Asti, which developed around one of the main road junctions of the Via Fulvia, became the most important town in current day Piemonte between the 12th and 13th centuries, and one of the most powerful free towns in northern Italia. Here passed through merchants and pilgrims, and the many religious orders that operated here were dedicated to the hospitales function: the most important was the Hospital of the Order of Knights of St John of Jerusalem, which settled in 1169 in the complex of the Church of the Holy Sepulchre, now known at the Rotonda di San Pietro and a splendid example of Asti Romanesque, built in 1100-1130 to model the Holy Sepulchre in Jerusalem. The impressive gothic Cathedral dedicated to the Assumption began being built from the end of the 18th century over a previous Romanesque building, of which remain the bell tower and the mosaic floor of the presbytery: the south side is of great impact, with tall windows and the 14th century porch; inside can be found paintings by Gandolfino, the greatest Renaissance artist in Asti, together with significant wood furniture of the 18th century.
In the adjacent ancient Church of San Giovanni there is the first part of the Diocesan Museum: the visitor route leads to the 8th century crypt and includes the gothic wooden choir stalls of the cathedral, 14th century sculptures, silver and vestments. In the Civic Museum of Sant'Anastasio, which includes the archaeological remains of some four churches (8th-18th centuries), there are capitals, corbels, cornerstones, carved stone elements and the beautiful 11th century Romanesque crypt. The Romanesque-gothic Minster of San Secondo was built in 1256 over the previous buildings dedicated to the Saint: inside there are fine works which include the polyptych of Gandolfino d'Asti and the Palio cloths donated every year to the Minster during the medieval Ceremony of the Offer, on the first Tuesday of May. Thirteenth century towers, built by the wealthy merchant families, characterise the old town: the tallest, the Trojana Tower Km 14,1 / Dislivello - 101 (46m), is one of the symbols of the town; also worth a visit is the Comentina Tower, the octagonal De Regibus, the powerful dei Ponte and the Guttuari.
The route then heads to Castello di Annone: from the central Piazza Campo del Palio you go along Corso Savona which leads to the Tanaro; before the bridge you turn left, along the park walk and continue by the side of the river.
Share on
Contacts
, 14020 Settime (AT)