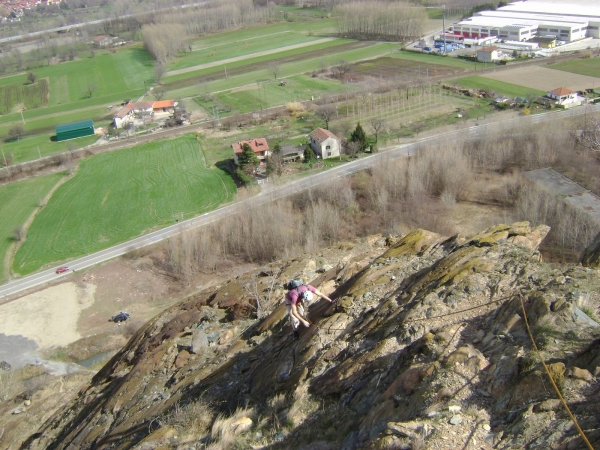 The via ferrata Carlo Giorda is located on the northern side of Monte Pirchiriano, on the top of which stands the ancient Abbey of the Sacra di San Michele.
The Ferrata della Sacra, besides being a panoramic and highly suggestive route, is also an itinerary full of history.

From Torino A32 exit Avigliana Ovest (West) and continue the SS 25 towards Susa, once you reach the city of Sant'Ambrogio along the main street, park in Croce Bell'Alda.

The route starts directly from the village of Croce Bell'Alda, indicating sign,, located on the north of Mount Pirchiriano the summit stands the Abbey of the Sacra di San Michele, one of the most important historical monuments of Italy.

Follow directions for the first part of the spur that runs along the quarry, then halfway through, cross far to the right. Choose the more obvious spur that descends from the top.

Normally there are no major technical difficulties or long vertical sections, but due to the route length we recommend early morning departure. There are two escape routes, the first after about 300 m. at the level of "Pian Cestlet", from where there is an easy path back to the village, a second after approximately 500 m. in altitude, the height of "U Saut du Cin" from where you can reach the village of San Pietro. From the top of the via ferrata which ends against the wall of the Abbey, go right down the path and you get to the paved road a few meters from the entrance to the Sacra di San Michele.