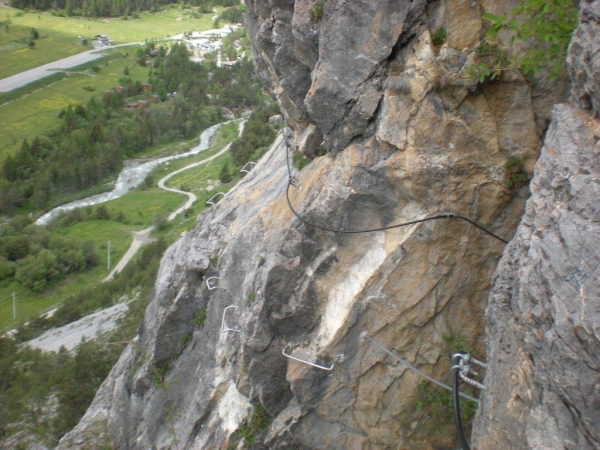 A via ferrata made up of paths, rocks and exposed routes, suitable for the most expert enthusiasts but also for the very young.

Start the climb with inclined pillars, short ribs and plates, then slant left to ledges and little drops you come to the fork in the "Balma Chamois." Continuing to the left crossing under a large roof will reach the shoulder Rouas. Or; from the junction of the "Balma Chamois" turning right, continue for athletic variant, where you can try, after an oblique stretch, with an overhang that leads into the upper band, and then continue on the long traverse of plaques Continue to dihedral and strapiombini and easy ridge leading to the Bosco Rouas on top. For a flatter trail and easy rocks go back to the shoulder. In ascending traverse on the left with easy path that gradually becomes a bit 'more exposed you come to the passage of the Grotta. A tightrope and a walkway allow crossing of the slits, with downhill, crossing more exposed now and ledges, you come to the large dihedral arched at the base of which terminates via ferrata.

Take the path that leads back to the parking lot.

The via ferrata has been equipped in his easy route with particular emphasis and attention at last to easily facilitate the path for beginners and youngsters.

Variant of the Cave, difficulty PD via ferrata, development over 40 m., Time 10 mn.