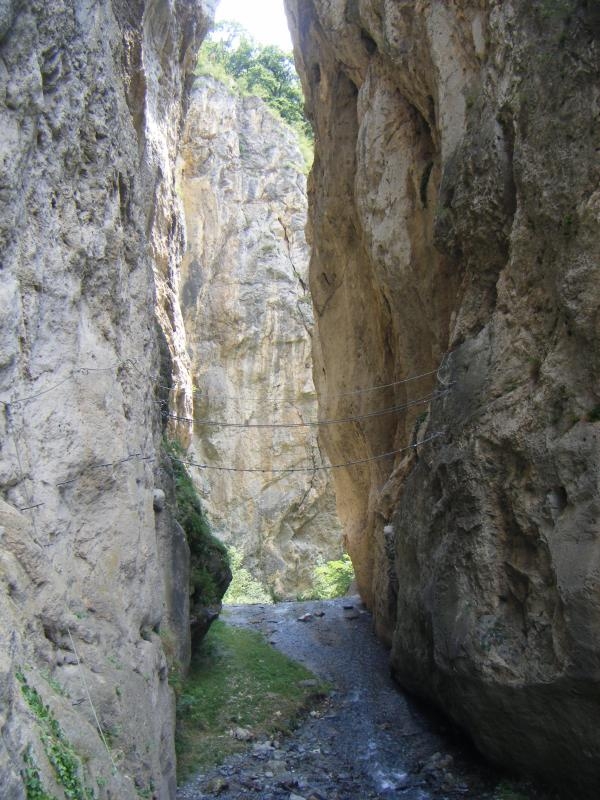 The path that leads to the Gola dell'Orrido di Chianocco starts softly, with pleasant routes and streams, until you reach a suggestive via ferrata, full of dirt descents, with athletic and demanding crossings.

From Turin A32 motorway exit San Giorio take direction Bussoleno after 500 meters turn right to Chianocco. park next to the river bridge Prebec, near the church and the two fortified houses

near a notice board of the Park, the path that leads to the gorge of 'Orrido, follow it through the vegetation, passing under a characteristic natural arch and sometimes wading the stream, until you reach the information panel of the Via Ferrata. Once turned the corner, where the canyon abruptly changes direction, starts the route equipped. At first an easy ledge then with the final overhanging a few tens of centimeters above the 'water it leads into a small cave, from where comes out with a short passage in overhang, a characteristic ledge and a crossing leading to the Tibetan bridge. Through which you reach the junction of the Grotta dell 'Orrido, a short path leading to the inside of this natural ravine, where they were found prehistoric remains. After crossing the bridge crossing is becoming more athletic and exhausting, as a result of the slight overhang characterizes the walls of 'Ravine. The middle and the end of "Crossing low" There are two very short equipped descents that allow you to stop the climb and sit near the river bed. You pick up with a slightly overhanging wall of about fifteen meters, and then continue along the "Traversata Alta" even more athletic than the former. You reach upstream of the highest weir in spring where it forms a beautiful pond, hence the path becomes much less demanding, a path first and then a steep climb leading to the beautiful natural balcony point summit of the Way.