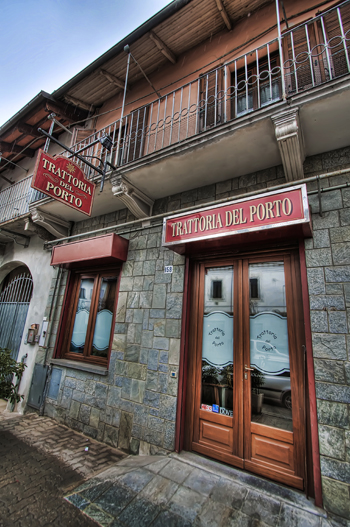 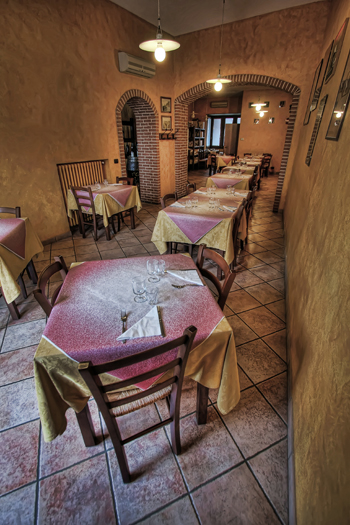 Trattoria del Porto is located in a historic building in Borgata San Bernardo on the road between Carmarmagnola and Casalgrasso , 25 Km south from Turin. Touristic sites in the surrounding area include the Ecomuseum of the Hemp and Vigna Park. The restaurant is family run and it is very cozy and simple. It can accommodate up to fifty guests . In summer you can relax in the outdoor restaurant on the road . Even after World War II the trattoria was well known for its homemade local cuisine that glorified the typical local traditions . The Chef Massimiliano has continued on this path and , since 2005 , he has been offering a wide range of à la carte dishes from Piedmont that intensify the flavors and nutritional properties of local products of excellent quality . Passion and imagination transform raw materials into dishes with a unique and delicate taste loved by both adults and children. The menu offers hot and cold starters that can also be adapted for a gluten-free cuisine . For instance we can mention Russian salad, veal with tuna sauce ancient way or even raw meat Fassone beaten with a knife . As of primi piatti customers can choose among typical tajarin lemon or meat sauce (sort of tagliatelle) , ravioli from Varaita Valley (gnocchi with cheese inside), agnolotti Piedmontese style with butter and sage and a paste of corn or risotto with Barbera red wine for coeliacs . The main courses are warm and strong like the rich cuisine of Piedmont is. Guests can enjoy , for example , the typical Carmagnola gray rabbit with red wine , a tender fowl roulade , boiled meat with green bath or a simple fish in foil or grilled . As for desserts the choice is between puddings ( cream pudding – panna cotta , chocolate pudding - Bonet , nougat parfait , ... ) , cakes ( made of PGI Langhe hazelnuts, apples, ... ) or egg-nog with unfailing Lady's Kisses and corn pastries . During the week , on weekdays , a genuine and nutritious menu workers is also proposed. You can organize special events by reserving in advance. The restaurant, located on the ground floor, is also easily accessible for people with disabilities. The interior is divided into two rooms , for a total of about 50 seats , equipped with air conditioning . Trattoria del Porto is open daily for lunch, only Thursday, Friday and Saturday for dinner. Pets are allowed.
Share on
Contacts
Via Del Porto, 158, 10022 Carmagnola (TO)
+39 0119717937
max.trattoriadelporto@gmail.com
Visit the website Social network

Cuisine
Type of Cuisine
Seasonal cuisine
Cuisine Km0
Italian
Piedmont
The chef
Massimiliano has been working as a cook for the past 20 years. When he was a child he loved frying omelets very much: that marked the beginning in his career. Today he is much more experienced and, of course, he can prepare full meals (starters, pasta, main courses and desserts). If you ask him which is his favorite dish the chef will answer "Roasted meat"! Massimiliano got his high-School diploma specializing in cooking and hotel services in 1996 in Pinerolo (Torino). While he was still studying he did a few internships to practice on the job in some renowned regional restaurants. Massimiliano started to work in a historical restaurant located in Piobesi Torinese, called la Stazione, where he gained first true experiences. The cook and the owner was a middle-aged woman who taught Massimiliano real and “ancient” recipes Piedmont’s style and showed him how to select and mix premium local raw materials. Five years later, Massimiliano challenged himself. He decided to study the contamination of his traditional cuisine with British and French tastes and so he moved for a few months to London and for about a year he lived in Paris where he found employment in large Italian restaurants. Having thus improved his managerial skills, working in kitchens with other international professionals, he decided to come back home and start his new own business . Waiting to find the right location and inspiration, he meanwhile worked in a traditional restaurant located in Santena, named “The old inn Rome”. At the age of 27, he opened his restaurant in Carmagnola that still operates today with the help of the tireless mother . The cuisine he proposes can also be adapted to a gluten-free diet. It is the result of a careful selection of top quality local raw materials which are creatively mixed and cooked so to enhance the flavors and scents. Massimiliano devotes lots of his time in experimenting and cooking because he does not want to serve any semi -finished products which, in the end, all the same. The extensive wine list is also the result of a careful selection of the chef who caters mostly on the hills of his beloved Piedmont .
Traditional dishes
Acciughe al verde
Carne cruda in insalata battuta al coltello
Vitello tonnato
Agnolotti del Plin
Agnolotti di carni con burro e salvia o sugo d'arrosto
Finanziera
Gran bollito misto alla piemontese
Fritto misto alla piemontese
Bagna Caoda
Bonet
Panna cotta
Zabajone
Pesche ripiene all'amaretto
Services and accessibility
Services
Pets Allowed
Air conditioning
Credit Cards Accepted
Outdoor seating
Events / ceremonies
Groups Allowed
Kid-friendly
Translated Menu
Vegetarian Menu
Car park
Pet-friendly
School groups allowed
Wi-Fi
Covers
Indoor covers : 50
Outdoor covers: 12
Posti dehor: 12
Posti eventi: 45
Disabled Access
Entrance fully accessible, no barriers or accessible with assistance
Room(s) with possibility of access to wheelchairs and with accessible tables
Lavatory facilities accessible and usable by people with limited mobility
Table service (no buffet or self-service) available or on request
Hours