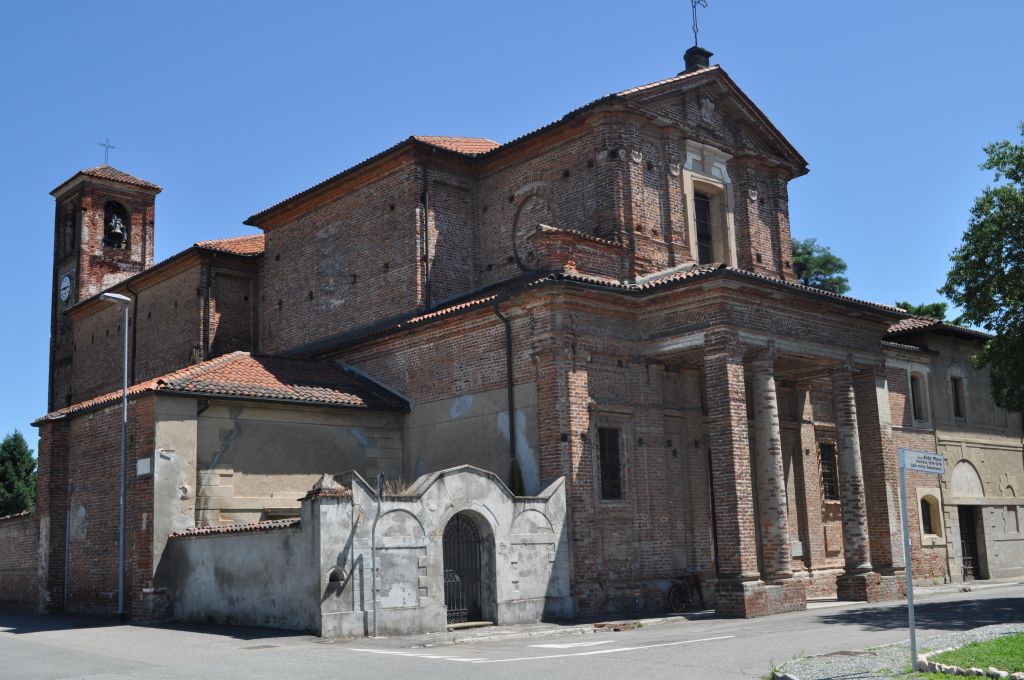 Km 12,5 / Elevation change - 15
In the Middle Ages, Vercelli was an essential stage for those crossing the Alps at Great St Bernard, Mont Cenis and Montgenèvre. In the town and surrounding areas, a large network of hospitalia for pilgrims and the poor developed: there were at least 14, not counting the inns and hotels.
The Abbey of Sant'Andrea, an example of the transition between the Padana Romanesque style and Gothic, is the symbol of the city. Built between 1219 and 1227, it was commissioned by Cardinal Guala Bicchieri of Vercelli, the leading figure in the events that marked English history for the succession of King John Lackland. The multicoloured facade, with its slender towers, is embellished by the lunettes in the portals, while the Gothic structure emphasises the majestic interior consisting of three aisles and a cross vault ceiling: the apse has wooden choir stalls from 1511; the cloister, built later than the basilica, has relief work, terracotta cornices and paintings from the early 16th century; the bell-tower was built in the 15th century.
The Cathedral of Sant'Eusebio has very ancient origins: of the original duomo, perhaps built by Eusebius himself and reconstructed in Romanesque style, only the tower remains (12th century). A later reconstruction in 1570 continued until the 19th century. Inside hangs a magnificent Crucifix covered in silver leaf from the Ottonian dynasty. There are also inscriptions of the 6th century and a marble sculpture called Our Lady of the Slap, probably dating from the 13th century. The Archbishop's Palace houses the Museum of the Treasury of the Duomo, with reliquaries and liturgical objects dating from the 12th to the 18th centuries: of particular interest are those of the late medieval period by San Giacomo maggiore and the famous Vercelli Book, homiliary on parchment in Old English (10th century).
Home to the priory since 1163, the Church of San Bernardo consists of a Romanesque part and a 19th century extension: the brick facade (12th century) is enlivened by blind arcades and carvings. The building, a diocesan shrine to Maria Salute degli Infermi, is related to the miraculous intervention of the Virgin Mary who, in 1630, freed Vercelli of the plague. At a stone's throw from the central Piazza Cavour, dominated by the octagonal Tower of the Angel (14th century), there is the Ancient Broletto in which was the Town Hall from the 13th century, with pointed porticoes; another tall square Tower faces it, erected by the family Vialardi.
Also of note is the 13th century Franciscan Church of Sant'Agnese in San Francesco, with medieval forms in the apse and bell-tower: inside there are paintings of the 16th century Vercelli school, a marble portrait from the Augustan period, engraved ceramic basins (14th century) and an Annunciation by Morazzone (c. 1620). Then there is the Dominican Church of San Paolo, also from the 13th century but which has been extensively restored and extended in later years: in an area at the base of the tower there is a wall frescoed with a theory of Saints, dating from the second half of the 13th century. Also the large Church of San Marco (1266), transformed in the 19th century into a food market and now an exhibition space, incorporates an earlier octagonal tower, probably built by the Avogadro family and now acting as the bell-tower.
Share on
Contacts
, 13040 Olcenengo (VC)